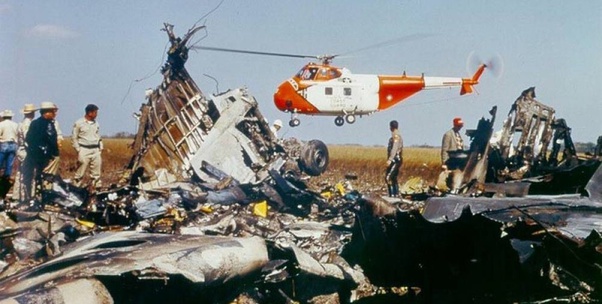 That afternoon the weather over the greater Miami area and Everglades National Park was pandemonium. Thunder storms produced squalls 250 miles long. Flight 705 would have to transverse the weather during climb out of Miami international.

The crew was acutely aware of the possibility of severe turbulence. The First Officer would relay to Miami departure control, “we can see it out ahead… it looks pretty bad…”

At 1:47 pm it hit the titular updraft- the rate of climb approached 9000 feet per minute, this lasted about 13 seconds.

The aircraft then peaked at an altitude of 19,285 feet with its airspeed falling to 215 knots. This lasted about 9 seconds.

The aircrafts vertical acceleration ceased and loads went from 1g to -2g. This lasted for 8–9 seconds.

-2.8g was the maximum for a moment before the crew attempted to recover- reversing to a 1.5g. At which point it reversed again to -3g.

Procured from the FDR.

The aircraft as a whole was always subsonic but at individual points on the wings and most importantly the horizontal stabilizers the wind shear, how fast the air was flowing over/below the surfaces, was probably supersonic thus forming little vortices in front of the leading edges. These prematurely disrupted airflow prior to the air reaching the leading edge. This prevented correct air deviation and therefore nullified much control- flapping helplessly desperate for airflow. This phenomenon is termed shock induced air flow separation (in front of the leading edge) and why nigh transonic dives are increasingly difficult to recover from.

I came across the term in Silkair 185’s report just now and I was like that’s it- I remember.[3]

By now the pilot had applied full pitch trim and full horizontal stabilizer up. At around 10,000 feet the aircraft broke up during partial recovery.

I guess we need a lesson to learn or something. Well recovery from nearly transonic dives is inversely correlated with the length of the uninterrupted dive- the longer the aircraft is diving the feasibility of recovery drops along with it. Recovery entails throttling back, deployment of speed breaks and avoiding sudden g force reversals.